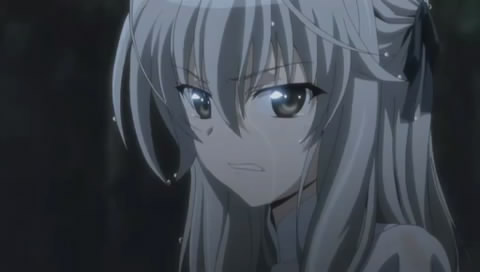 Sora decides to follow everyone at the beach, but at the moment she got off the bus, news that a young man was rescued from drowning unconscious. As Sora looks over, she finds out that the boy in question is Haruka. However, Nao acted quickly and performed mouth-to-mouth resuscitation. With that event, Sora becomes even more insecure, eventually telling Haruka not to leave home and tells all sorts of excuses just to make him stay. One day, Sora made Haruka choose between her and Nao, but he just shrugs it off and proceeds to school with Nao as if nothing is wrong. That afternoon Haruka finds Sora missing after receiving a text from her saying “Let’s leave here.” Akira, Kazuha, and Ryouhei joins Nao and Haruka in search of her, until, amidst the rain, Nao finds Sora at the bus stop. Refusing to go with Nao, Sora runs out of the bus stop, angrily telling her that she is the reason why Haruka has changed. Suddenly, a bolt of lightning strikes the bus stop and burst into flames. Sora then remembers she forgot her stuffed bunny inside. Nao rushes in to retrieve the only memento Sora has of her mother, causing her to be nearly trapped inside. After receiving the rescued item, Sora reveals to Nao her insecurities with her, that she is afraid Haruka would leave her alone. The next night, Sora joins everyone during the Summer Festival at the shrine. This time, Sora is more receptive of Nao.